by Aleksandar Urdarevik on June 19, 2020
Clay Guida beat him once. Now he wants to take it back with Nate Diaz again. 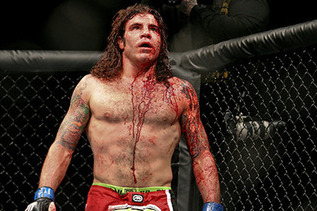 Guida (35-19 MMA, 15-13 UFC) handed Diaz his first octagon loss at UFC 94 in 2009 with a narrow split decision. The pair have had some run-ins since over the past decade and Guida indicated he still wants to get his hand on Diaz.

“I’ve said it before, I’ll say it again, I’ll never back down from this one, Nate Diaz has got it coming to him someday,” Guida told reporters Thursday in a virtual media day session. “I beat his ass once, I’ll beat his ass again. If he ever toes the line and they stop protecting him, you know my number, Nate, so don’t be scared, homie. You know where I’m at, buddy.”

Guida faces Diaz’s friend Bobby Green this Saturday at UFC on ESPN 11. They were originally scheduled to fight in June 2018, but the match up dissolved when Green backed out.

Guida went on the offensive, calling Green a "coward", and referring to him as “Bobby Yellow.” Green fired back with some harsh responses. But despite their back-and-forth surrounding the 2018 bout, the fight isn’t personal for Guida.

“That’s one thing I’ve never been, personal with my opponents,” Guida said. “I don’t know him well enough to dislike him. I don’t dislike anybody, life is too short for that. I know it’s going to be a dogfight, I know Bobby is gonna come prepared, he’s gonna come ready because I know he wants this fight too and he’s a gamer. He wants to put on a show, he’s flashy, he’s a good striker, a good wrestler, a good athlete and it’s gonna be a great fight.”